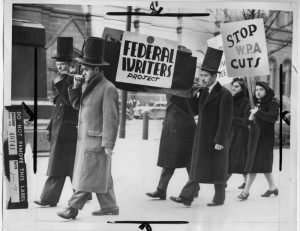 These protesters walking through Center City in 1939 are holding a funeral for the Federal Writers’ Project, a program under the Works Progress Administration that was about to receive drastic budget cut. (Historical Society of Pennsylvania)

As part of the Works Progress Administration(WPA), the Federal Writers’ Project (FWP) employed thousands of writers across the United States during the Great Depression to author a variety of works. FWP writers worked on projects that would support the community, which mainly involved local histories, plays on local subjects, and children’s books based on local events. When the economy began to improve, the federal government decreased funding for programs like the FWP. The protesters seen here in Center City Philadelphia in 1939 are staging an imitation funeral for the FWP. (Historical Society of Pennsylvania)