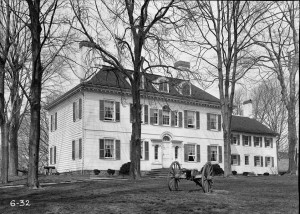 George Washington turned the Ford Family Mansion in Morristown, New Jersey, into a headquarters for the Continental Army during the winter of 1779. The Ford Mansion became part of the first National Historic Park in 1933. (Library of Congress)

During the Continental Army’s second encampment at Morristown, New Jersey, in the winter of 1779-80, George Washington occupied this mansion, built by iron manufacturer Jacob Ford Jr., which later became part of the first national historical park in 1933. Ford had served in the Morris County Militia as a colonel during the Revolutionary War and lent his home to other Continental soldiers before his death in 1777. Ford’s wife, Theodosia, invited Washington to use the mansion as a headquarters as the Continental soldiers constructed and stayed in housing five miles south, in an area called Jockey Hollow. The Ford family continued to hold the house until the 1870s, when the Washington Association of New Jersey purchased the property and preserved it as a historic house museum. National Park Service leaders included this mansion, Jockey Hollow, and other sites involved in the Continental Army’s camp in Morristown for first national historical park, which was approved by Congress and signed by President Herbert Hoover in 1933.