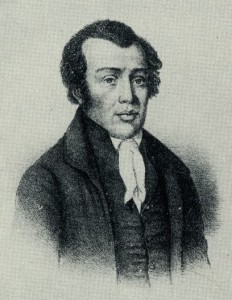 Richard Allen was born a slave in Philadelphia in 1760. After gaining his freedom and becoming a Methodist preacher, Allen began the Free African Society and helped the African American community of Philadelphia into the 1830s. (Historical Society of Pennsylvania

Richard Allen, born in Philadelphia as a slave in 1760, used his role as a Methodist religious leader to support abolitionism and assist the swelling African American community in Philadelphia from the 1780s through the1830s. Although born in Philadelphia, Allen and the rest of his family were sold to a Delaware plantation owner in the 1760s. While in Delaware, Allen began to attend weekly Methodist Society meetings, and later became a Methodist preacher after he was able to purchase his freedom. The Methodist preaching circuit allowed him to attend Methodist meetings throughout Delaware, Maryland, New Jersey, and Pennsylvania. After preaching in Philadelphia numerous times, Allen accepted an offer in 1786 to be a weekly speaker at St. George’s Methodist Episcopal Church in Philadelphia. Although St. George’s was primarily a white church, it had services for the steadily growing African American audience.