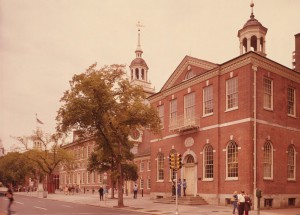 Built to be the County Courthouse for Philadelphia, the building in the foreground was occupied by the U.S. Congress while Philadelphia was the Capital of the United States between 1790 and 1800. (Library of Congress)