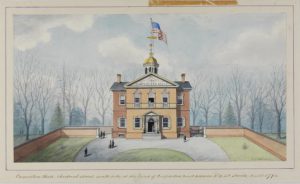 Carpenters’ Hall was built for the Carpenters’ Company, an artisan guild and the oldest extant trade guild in the nation. Shortly after it opened in 1774, it was the headquarters of the First Continental Congress. (Historical Society of Pennsylvania)

One of the city’s more storied historic buildings was originally constructed to house an artisan’s guild. The Carpenters’ Company was organized in Philadelphia in 1724 for the benefit of the area’s craftsmen, providing an education and support network. Many founding members were alumni of London’s Worshipful Company of Carpenters and modeled their new guild after it. They began construction of their headquarters, Carpenters’ Hall, on Chestnut Street near Third Street in 1770.

Months after the building was completed in 1774, it housed the First Continental Congress, a meeting of delegates from twelve of the colonies early in the Revolutionary era. The next year, Benjamin Franklin conducted secret meetings with French spy Julien Achard de Bonvouloir to secure French aid during the war. Today the hall is still owned by the Carpenters’ Company, the oldest extant trade guild in the nation. Members of the company have been involved in the construction of some of Philadelphia’s most iconic public buildings, including Independence Hall, City Hall, and Reading Terminal Market.