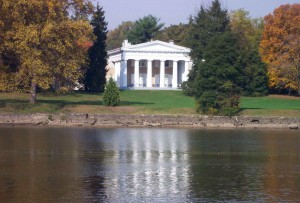 Andalusia, overlooking the Delaware River, was built in 1795 and enlarged by B. Henry Latrobe for John Craig in 1806. In 1835, Craig’s son-in-law Nicholas Biddle (1786-1844) commissioned Latrobe’s student Thomas Ustick Walter to expand it and add the majestic temple front. The Biddle family’s house and grounds are preserved by the Andalusia Foundation and open for private tours. (Photograph courtesy of Connie S. Griffith Houchins.)