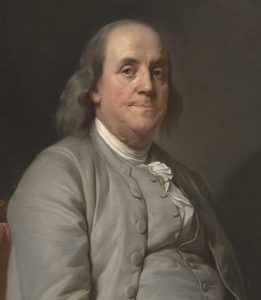 One of the earliest book publishers in Philadelphia was a founding father of the United States, Benjamin Franklin. Franklin published sixteen books while living in Philadelphia, more than any other American publisher of his time. Due to the risky investments natural to the publishing business, the books Franklin chose were primarily those that had already proven popular in Britain. He also established a printing shop and book bindery at 320 Market Street. Franklin is perhaps best known for his political work during and after the American Revolution. While serving as an ambassador in Paris, he met fellow publisher Mathew Carey, who would later emigrate to Philadelphia and begin his own publishing firm.

Franklin’s Print Shop has been re-created at the original location on Market Street and is a popular tourist attraction.