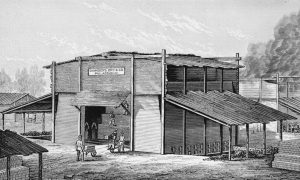 Chambers Brothers, a West Philadelphia manufacturer of brick-making machinery, portrayed this brick kiln in its catalog in 1892. (Archive.org)

Chambers Brothers, a Philadelphia manufacturer of brick-making machinery on Fifty-Second Street below Lancaster Avenue, portrayed this brick kiln in its catalog in 1892. Described as a “ten-eye, open-top, coal-burning kiln,” the structure had a capacity of between 180,000 to 200,000 building bricks.

At the close of the nineteenth century, Philadelphia was producing about 220 million bricks annually. High demand for housing along with the high shipping costs for heavy material meant that it was much more economical to use locally made bricks. In 1903, Pennsylvania, led by Philadelphia, ranked second in the nation as a producer of clay products (behind Ohio), but it ranked first in the manufacture of common bricks and pressed bricks. New Jersey was not far behind, ranking fifth.