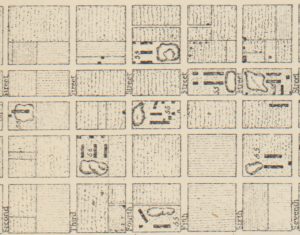 The 1794 Plan for the City and Suburbs of Philadelphia documented an abundance of brickyards between Broad Street and the Schuylkill River. (University of Texas Libraries)

The 1794 Plan for the City and Suburbs of Philadelphia documented fourteen brickyards within the city limits, including an abundance between Broad Street and the Schuylkill River. In this map detail, bold lines denote kilns in brickyards between Locust Street (bottom) and Chestnut Street (top), in the area from Schuylkill Second (Twenty-First) Street on the left to Schuylkill Seventh (Sixteenth) Street on the right. By 1799 brickmaking employed enough people that workers founded the Bricklayers Company, which persisted well into the twentieth century.