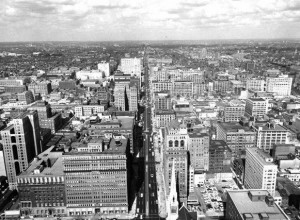 North Broad Street, seen from atop City Hall in 1959.(PhillyHistory.org)

North Broad Street, seen here from atop City Hall in 1959, is a scene of tall office buildings and businesses. However, by the mid-twentieth century North Broad Street was beginning to decline as the successful business owners of downtown moved to the suburbs. Mansions that once lined the street were converted to apartments, and those that had become dilapidated were bulldozed or left to rot. North Broad Street was not lost completely though, as it became a hub for African Americans during World War II and their businesses, cultural venues, and community organizations found success along the street. In the later twentieth and early twenty-first centuries, North Broad Street experienced a revival in business, as plans for the Avenue of the Arts extended northward and as Temple University expanded its main campus and hospital.