William Charles, A Boxing Match, or Another Bloody Nose for John Bull, circa 1813 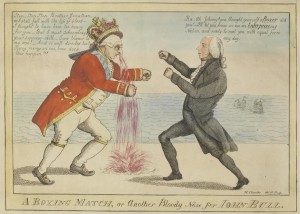 William Charles focuses on the bloody War of 1812 between the British and the young United States in this political cartoon, personifying England as “John Bull” (King George III) and the United States as “Brother Jonathan” (President James Madison). The British restriction of U.S. trade, impressment of American seamen, and American desire to expand its territory resulted in a declaration of war on Britain.

Depicted in this cartoon, we see John Bull, or King George III, leaning forward (as though attacking) with his fists forward, while James Madison leans backward with his fists up in defense. The blood pouring from the king’s nose represents the loss of the British warship “Boxer” in its naval “boxing match” with the American frigate “Enterprise” (the ships are depicted in the background to the right). While this only references one battle in the War of 1812 (in September 1813), the war would be full of individual losses and victories for America and would eventually lead to the burning of Washington, D.C., (in August 1814) before the British would finally be forced to concede. This cartoon was intended to raise American spirits and bolster patriotism in a back-and-forth war often referred to as “the Second War of American Independence.”