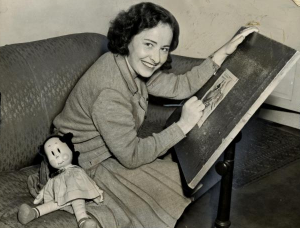 Marjorie Buell was one of America’s first internationally famous and hugely successful female cartoonists. Publications quickly noticed her natural understanding of witty humor after she had her first cartoon published in the Philadelphia Ledger when she was only 16 years old (c. 1920). The “Little Lulu” doll beside her in this picture is evidence of her character’s strong identity as well as her ability as an entrepreneurial skill. Her character would make appearances on television shows, greeting cards, games, toys, coloring books, and even fashion accessories. Marge Buell not only served as a role model for female artists or cartoonists, but also as a role model for female businesswomen, as she retained complete creative control over all “Little Lulu” usages until she sold them in 1971.