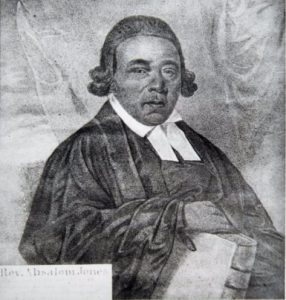 Absalom Jones was born into slavery in Delaware in 1746. After purchasing his own freedom, Jones became a leader in Philadelphia’s black community. (Historical Society of Pennsylvania)[/caption]

Headed by black founding fathers Richard Allen (1760-1831) and Absalom Jones (1746-1818), the Free African Society was founded on April 12, 1787, as a nondenominational mutual aid society and the first dedicated to serving Philadelphia’s burgeoning free black community. Members contributed one shilling per month to fund programs to support their social and economic needs.

The Free African Society emerged from discussions among Allen, Jones, and other men in early 1786, when Allen was leading prayer meetings and early-morning services for black congregants of St. George’s Methodist Church. Concerned that the majority of Philadelphia’s black community was illiterate and did not go to church, these men decided to form a nondenominational, religious society to promote religion and literacy, as well as assisting members’ families to help cover the costs of burial after a member’s death.

To join the Free African Society, prospective members agreed to pay the monthly dues and to abide by moral requirements to be temperate and refuse to engage in disorderly behavior. Members of any religious denomination could join, but anyone who behaved in disorderly ways, abused alcohol, or did not pay their dues faced expulsion. By demanding that members abstain from feasts, drinking, and gambling, the society’s officers sought to combat beliefs that blacks were lazy, disorderly, or frivolous—claims often deployed as a justification for slavery. They also argued that indulgence in the “sins” of drinking, gambling, or idleness showed a lack of respect for blacks still enslaved. 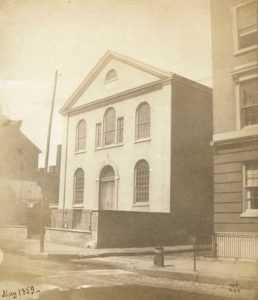 This photograph, taken in 1859, shows the African Episcopal Church of St. Thomas at its original location at Fifth and Adelphi Streets (St. James Place). The congregation later moved to 6361 Lancaster Avenue. (Library Company of Philadelphia)[/caption]

Though the Free African Society was not particularly long-lived, it spurred the creation of many similar African American mutual aid societies, more than one hundred in the Philadelphia region by 1838. The society’s mission of community building and assisting one another also contributed to the self-sufficiency of Philadelphia’s growing free black community. Not only did the churches founded by Jones and Allen become cultural and religious centers of the community, but free blacks also began moving to the neighborhoods around the churches, close to shops, businesses, and schools operated by former members of the Free African Society.

Elise Kammerer is a Ph.D. candidate in American history at the University of Cologne, where she specializes in free black education in early national Philadelphia and the antislavery movement in the eighteenth and nineteenth centuries.