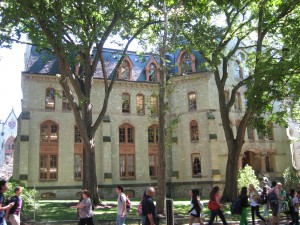 Medical Hall (later Logan Hall, Claudia Cohen Hall) opened in 1874 soon after the University of Pennsylvania moved to its campus in West Philadelphia. A Gothic design by the professor of architecture Thomas Webb Richards (1836-1911), it is the oldest extant medical school structure in the city. (Photograph by Steven J. Peitzman)