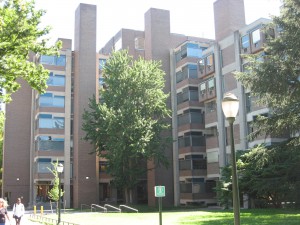 The Alfred Newton Richards Medical Research Building of the University of Pennsylvania, built between 1957 and 1964, was certainly not Philadelphia’s first space for biomedical research. It is, however, the most widely known, being one of the most acclaimed designs of notable modernist architect Louis Kahn, himself a Philadelphian. It symbolizes the increase in laboratory science in the city which occurred in the 1950s and 1960s. (Photograph by Steven J. Peitzman)