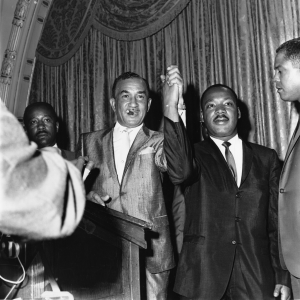 Cecil B. Moore (center, to the left of Martin Luther King Jr.) was a prominent figure in Philadelphia’s civil rights movement at a time when the African American population of Philadelphia was steadily growing but racially discriminatory practices still prevailed. Born in West Virginia in 1915, Moore moved to Philadelphia after serving in World War II to study law at Temple University. After graduating in 1953, Moore became a defense attorney who specialized in helping working class African American clients. The number of working-class African Americans in Philadelphia grew steadily in the post-World War II period, but an economic downturn beginning in the 1950s made it difficult for working-class individuals to find jobs or afford any services beyond the necessities. Moore’s confrontational and direct approach in the courtroom continued when he entered the public sphere to combat social injustice.

African Americans made up roughly one-third of Philadelphia’s population by the 1970s, but racially discriminatory practices routinely affected their lives. Moore’s confrontational approach to fighting for the African American community was powerful but controversial. He did not opt for private negotiations or compromises for what he felt was the right course of action. While president of the Philadelphia branch of the National Association for the Advancement of Colored People (NAACP) from 1963 to 1967, he encouraged African Americans to picket and protest for the right to join labor unions, de-segregate businesses, and receive better public education. He complemented these tactics with programs aimed at getting the growing African American community to vote and become more involved with local politics. Moore also restarted the fight to desegregate Girard College in 1964 and acted as the main attorney on the case until 1968, when the Supreme Court ruled that Girard College’s attendance policy was unconstitutional. Some criticized Moore’s tactics as too aggressive, but they achieved results and acknowledgement of national civil rights leaders like Martin Luther King Jr. This photograph of Moore and King was taken during the struggle to desegregate Girard College in 1965.

Moore died from cardiac arrest at age 63 in 1979, but his legacy as a civil rights leader has lived on in numerous acknowledgements around Philadelphia. A section of Columbia Street between Front and Thirty-Third Street was renamed Cecil B. Moore Avenue in 1987, and the Southeastern Pennsylvania Transportation Authority (SEPTA) rededicated the Broad Street line subway station on Cecil B. Moore Avenue as the Cecil B. Moore Station.