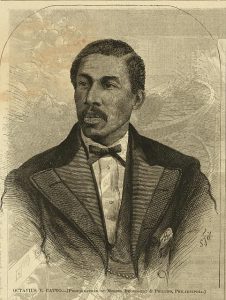 After the Civil War, Octavius Catto served as secretary of the Pennsylvania Equal Rights League and vice president of the State Convention of Colored People in 1865. Library of Congress

Octavius Catto was born free on February 22, 1839, in South Carolina. Catto, the son of a preacher, attended many segregated schools before finishing his education at the Institute for Colored Youth. After graduating, Catto began teaching at his alma mater in 1859, using his role as an educator to improve the African American community. Catto’s activism took shape after the Civil War when he served as secretary of the Pennsylvania Equal Rights League and vice president of the State Convention of Colored People in 1865.

Through his activism, Catto sought increased African American voting rights, desegregated educational institutions, and improved public services. After asking the mayor of Philadelphia, Daniel Fox, to consider greater protection for African American voters who were being harassed and intimidated at the polls, Catto was murdered on Election Day, October 10, 1871. He was shot by a white man, later identified as Frank Kelly. Although there were numerous witnesses to the shooting, Kelly was not convicted of a crime.