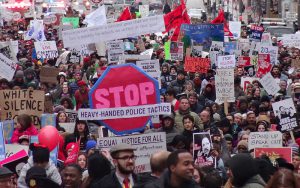 These demonstrators turned out on Martin Luther King Jr. Day on January 19, 2015, here heading south on Broad Street toward City Hall. Many protesters carried signs with messages reflecting social issues such as police brutality, a raise of minimum wage, the need for jobs, and the fight against racism. Many of the issues represented at the march were the same as the issues spotlighted at the 1963 March on Washington where King delivered his famous “I Have a Dream” speech. (Photograph by Donald D. Groff for the Encyclopedia of Greater Philadelphia)