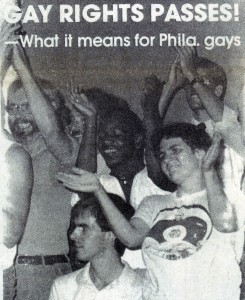 Men and women celebrate the passage of a bill that added sexual orientation to the city’s Fair Practices Ordinance, outlawing anti-gay discrimination in employment, housing, and public accommodations. (Photo courtesy of the Philadelphia Gay News.)

Throughout the summer of 1982 Philadelphia activists again fought for the passage of a “gay rights law,” an amendment to the city’s Fair Practices Ordinance to prohibit anti-gay discrimination in housing, employment, and public accommodations. This time, there was much broader support for gay and lesbian rights. Despite last-minute efforts by the Roman Catholic Archdiocese to stall it, the Philadelphia City Council passed Bill 1358 in August 1982 with an overwhelming 13-2 vote. Men and women hearing the result of the vote are pictured here in the Philadelphia Gay News. A few weeks later, on September 9, the bill became law by default, without the signature or support of Mayor Bill Green. Harrisburg, the state capital, revised its own City Code to include protections against discrimination based on sexual orientation and gender identity in 1983. (Photo courtesy of the Philadelphia Gay News.)