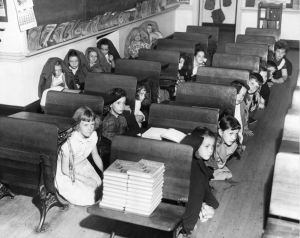 Schoolchildren in Philadelphia learned to “duck and cover” in the event of a nuclear strike during the Cold War. Many local schools were also designated as fallout shelters. Special Collections Research Center, Temple University Libraries

During the Cold War, Philadelphia’s schoolchildren learned to protect themselves in the event of a nuclear strike. They were taught to crouch low to the ground and cover their heads in an attempt to protect them from the aftereffects of a nuclear blast.

A nationally released 1951 short film entitled Duck and Cover was shown to illustrate the technique, instructing pupils to assume this position “when you see the flash.” Civil Defense efforts like Duck and Cover were deemed necessary when the Soviet Union began testing its own nuclear weapons in 1949. Additionally, many area schools were designated as fallout shelters, where the public could seek shelter in the event of a nuclear attack.

Even into the twenty-first century, some of the ubiquitous black and yellow fallout shelter signs remained at area schools. “Duck and Cover” training was officially ended in 1991 after the breakup of the Soviet Union brought the demise of the Cold War.