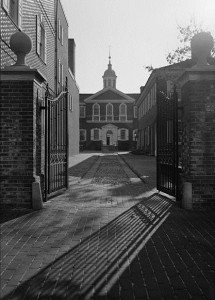 Carpenters’ Hall, meeting place of the First Continental Congress, in a twentieth-century photograph for the Historic American Buildings Survey. (Library of Congress)

Representatives of twelve colonies assembled in Philadelphia in September 1774 at Carpenters’ Hall, then and since the meeting hall for the Carpenters’ Company of the City and County of Philadelphia.

The choice of Carpenters’ Hall, rather than the Pennsylvania State House, reflected the complex politics surrounding the independence movement. The State House was the seat of the Pennsylvania Provincial Assembly, which in the fall of 1774 was not only against independence but was viewed by many in Philadelphia as highly sympathetic to the British Crown. Galloway had served as Speaker of the Assembly since 1766, and he was clear in his belief that the colonies needed to reconcile their differences with Britain (later, in 1788, he moved to England). Carpenters’ Hall also housed the collections of the Library Company of Philadelphia, established in 1731 by Pennsylvania delegate Benjamin Franklin (1706-1790), of which the delegates were made subscribing members. (Twentieth-century photograph, Historic American Buildings Survey)