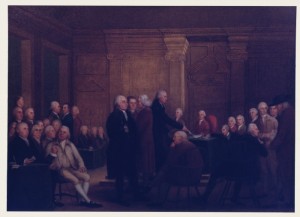 Congress Voting Independence, a painting by Edward Savage, recreates the scene inside the Pennsylvania State House in 1776. (Historical Society of Pennsylvania)

This painting by Edward Savage is the most accurate known depiction of the interior of the Pennsylvania State House at the time of the Declaration of Independence. It is a recreation of the event, painted after the fact in the late 1780s or early 1790s. But it is believed to be based on an earlier work by Robert Edge Pine, who occupied the same room as his art studio in the early 1780s.