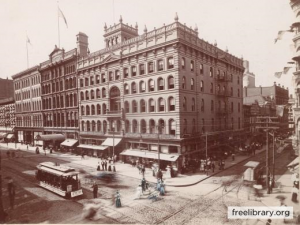 Strawbridge and Clothier was one of three large department stores in the area. The store was founded in 1868 and stretched along 8th to about 9th and along 8th to Filbert. (PhillyHistory.org)

Throughout the mid-nineteenth century, there was a rise in large retail outlets specializing in “fancy and staple dry goods.” These stores sold a wide array of fashion-related items including ready-to-wear garments, trimming, and accessories. Founded in 1868, this picture was taken thirty years later, when the store was in its prime. In 1996, Strawbridge was sold to The May Department Stores Company, which was eventually sold to Macy’s in 2005. Strawbridge and Clothier operated until 2006 when their doors were shut for good.