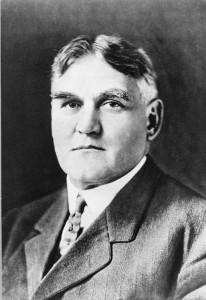 Martin G. Brumbaugh became superintendent of Philadelphia’s school system in 1906, after specializing in childhood education for more than twenty years. (Library of Congress)

Before becoming superintendent of the Philadelphia public school system in 1906, Martin G. Brumbaugh was a prominent member of the education and teaching community for more than twenty years. After growing up on his family’s farm in Huntingdon County, Pennsylvania, Brumbaugh received his teaching certification from Brethren Normal School (later named Juniata College) and became the superintendent of the Huntington County public school system. He also ran multiple teaching institutes in Louisiana in the 1880s. Brumbaugh became president of the Juniata College soon after earning his Ph.D. in education from the University of Pennsylvania in 1894, then left the position in 1900 to become the commissioner of education in Puerto Rico. By 1902, Brumbaugh developed a popular series of educational books called the Brumbaugh Standard Readers, which taught children reading, writing, and arithmetic with patriotic themes.

Brumbaugh became the superintendent of Philadelphia’s public school system in 1906 and drastically reorganized the ways schools operated and taught children by building additional primary and secondary schools, reforming academic programs in the high schools, and raising teacher salaries. Brumbaugh served as the superintendent of the Philadelphia School District until 1914, when he ran a successful campaign to become governor of Pennsylvania. This image of Brumbaugh was taken in 1914 as part of the election campaign. After Brumbaugh’s term ended in 1919, he became the president of Juniata College again from 1924 until his death in 1930.