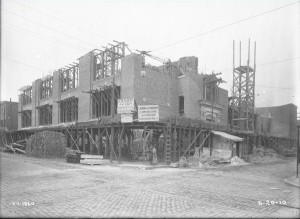 More than forty elementary and secondary schools were built during the tenure of Philadelphia school system Superintendent Martin G. Brumbaugh from 1906-1915. The Thomas Durham Elementary School, located at Sixteenth and Lombard streets, was part of Brumbaugh’s push to create more institutions for the children of Philadelphia. The school was named after Thomas Durham, who was president and director of the seventh section (bordered by South, Spruce, Seventh, and Twenty-Second streets) of the Philadelphia School District throughout the 1880s and 1890s. Construction began in the fall of 1909 and the school opened to students in November 1910. This image of the building during construction is from May 1910. The school became part of the National Register of Historic Places in 1988, but closed as a public school in the 1990s. The school became the Independence Charter School in 2001.