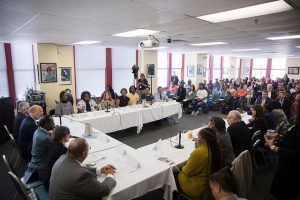 Workers at many area hospitals are represented by District 1199C of the National Union of Hospital and Health Care Employees. In this photograph, Pennsylvania Governor Tom Wolf (seated at head table, second from left) is shown attending a discussion of apprenticeship programs sponsored by District 1199C at its Breslin Learning Center in Center City Philadelphia. The center is a program of the District 1199C Training and Operating Fund, which was created in 1974 by collective bargaining between the union and eleven Philadelphia hospitals.