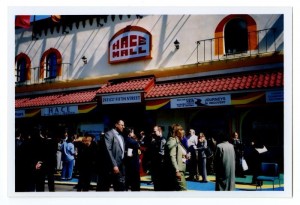 The Golden Block (El Centro de Oro) developed around North Fifth Street and Lehigh Avenue in the 1970s as a business center catering to the growing Spanish-speaking population of Philadelphia. (Historical Society of Pennsylvania)

The Hispanic Association of Contractors & Enterprises (HACE) is an economic development corporation that supports the Hispanic community around the “Golden Block” (North Fifth Street and Lehigh Avenue) area in North Philadelphia. The Golden Block (El Centro de Oro) developed in the 1970s as a business center catering to the growing Spanish-speaking population of Philadelphia. HACE formed in 1982, after an economic depression closed a number of Hispanic businesses and threatened to close a prominent Hispanic shopping center on Fifth Street. HACE provides financial assistance to Hispanic entrepreneurs and develops residential properties around the Golden Block in an effort to rejuvenate the local community. The HACE Mall on Fifth Street, pictured here during an opening ceremony in 2002, was part of a ten-year development program for the Golden Block, which included creating a golden sidewalk design, building facade repair, and mural paintings by local artists.