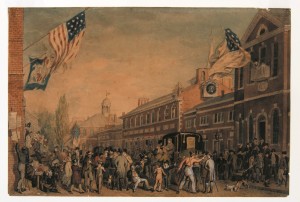 Philadelphians submitted their election day ballots through the windows of the old Pennsylvania State House in the early nineteenth century, when the building served the needs of city government. This depiction by John Lewis Krimmel portrays the tumult of political activity and Chestnut Street life in 1815, when the building also housed Charles Willson Peale’s Museum on the second floor.

This scene records the lack of interest in preservation of the old State House, despite its historic associations. The building’s steeple had rotted away by 1781 and had not yet been replaced. The original piazzas flanking the central structure had been demolished and replaced by rows of offices for the city and county government.

John Lewis Krimmel, a young German immigrant who specialized in genre scenes of Philadelphia street life, was among many artists who worked in the vicinity of the old State House. During these years, the prolific painter Thomas Sully had his studio in Philosophical Hall behind the State House and attracted a following of artists to his classes and sketch club.