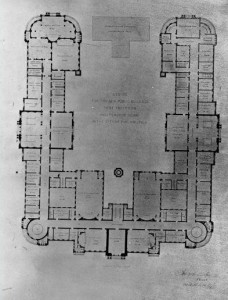 One proposal for a new city hall in 1870, by John McArthur Jr., would have surrounded Independence Hall with a massive Second Empire-style structure. (PhillyHistory.org)

By the second half of the nineteenth century, Philadelphia’s city and county governments had long outgrown the eighteenth-century buildings on Independence Square. Deciding where to place a new City Hall presented a new opportunity for debate about the historical significance of Independence Hall and its square.

In 1870, architect John McArthur Jr. created this plan for a new City Hall that would have preserved Independence Hall (shown at the top of the plan) but none of the other buildings on the square. Ultimately, an election determined that the new City Hall should be placed in Center Square instead, and McArthur adapted his design for the City Hall that remains there today.