Scull and Heap Map of Philadelphia, 1752 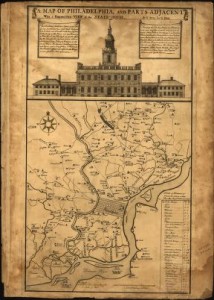 The Pennsylvania State House, with its added tower and steeple, depicted on a 1752 map by Nicholas Scull and George Heap (Library of Congress).

The early prominence of the Pennsylvania State House is portrayed in this map of “Philadelphia and Parts Adjacent,” published by Philadelphia surveyors Nicholas Scull and George Heap. At the time of the map’s creation, the new tower and steeple were not yet finished, so Heap created the drawing based upon construction plans.

The map indicates Philadelphia’s original boundaries, from river to river and from South to Vine Streets – the extent of the city until its consolidation with Philadelphia County in 1854.