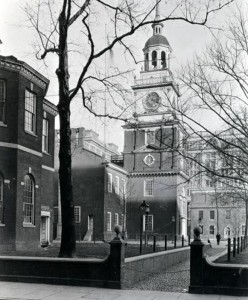 In 1828, the Philadelphia City Councils decided to commission a new steeple for Independence Hall to replace the structure that had been removed in 1781. In the growing and industrializing city of the nineteenth century, city officials saw the need for a steeple that would house clocks to regulate time and a bell to sound alerts in case of fire.

Planning for the new steeple showed a growing regard for Independence Hall as a place of historic significance. Against the initial advice of the commissioned architect, William Strickland, the City Councils insisted that the new steeple should resemble the appearance of the old State House in 1776 as closely as possible.

A new restoration of the Independence Hall steeple was completed by Independence National Historical Park in 2012.