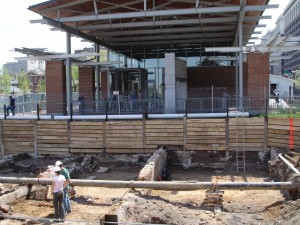 Archaeologists investigate the site of the President’s House near the new Liberty Bell Center (background) in 2007.

Public interest in the existence of slavery in the household of President George Washington led to archaeological investigations of the President’s House site. The discovered building foundations remain visible in the memorial subsequently constructed near the Liberty Bell Center (background).