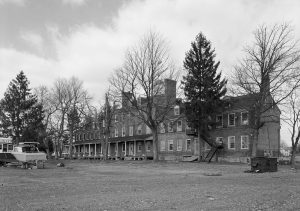 The Lazaretto is the nation’s oldest surviving quarantine hospital. All passenger ships entering Philadelphia in the nineteenth century were required to dock here so that the passengers could be inspected for infectious diseases. (Library of Congress)

One of the city’s earliest methods of controlling large epidemics was to quarantine the ill to prevent them from infecting others. Built in 1799 in response to the devastating yellow fever epidemics that plagued Philadelphia, the Lazaretto Quarantine Station in Tinicum Township, Delaware County, is the oldest surviving quarantine hospital in the Western Hemisphere. All passenger ships entering Philadelphia were required to dock at the Lazaretto pending a health inspection of passengers.

A precipitous rise in immigration through the Lazaretto occurred in the 1870s; between 1873 and 1870, the number of passengers inspected jumped from four thousand to thirty thousand. At the time, a devastating cholera epidemic was spreading through much of Europe, including the United Kingdom, and Philadelphians feared the disease would spread from the quarantine hospital to the rest of the city. In response, a new quarantine station was built at Marcus Hook, Pennsylvania, about twenty miles south of Philadelphia. The Lazaretto closed in 1895. The building was added to the National Register of Historic Places in 1972 and remains standing.