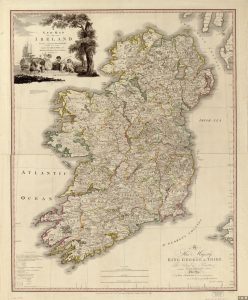 A New Map of Ireland : Civil and Ecclesiastical, published in London in 1797, depicts the homeland of Irish immigrants to the United States. (Library of Congress)

A New Map of Ireland : Civil and Ecclesiastical, published in London in 1797, depicts the homeland of Irish immigrants to the United States. Ireland’s four provinces and thirty two counties reflect ancient tribal and monarchical divisions. One-sixth of the island is bog, and archaeologists have discovered numerous ancient bog burials there preserving human remains and artifacts there dating from the Neolithic period. The island nation is also rich in Neolithic ceremonial sites such as Newgrange and Tara. The medieval native source, The Book of Invasions, recorded six invasions in remote antiquity, the last of which was that of the Indo-European Celtic people, who brought horses, chariots, and their language, which bore a similarity to that of Celts on the European Continent. Irish Celts developed Brehon Law, the oldest legal system in Europe, and an early written script called Ogham. Christianity was introduced in the late fifth century by St. Patrick, and Ireland developed a rich ecclesiastical artistic tradition at monastic sites such as Kells and Monasterboice. Later invasions also shaped the course of Irish history, including the pagan Vikings from the eighth through eleventh centuries AD, who initially destroyed many Christian sites before converting to Christianity and assimilating into the Celtic majority. Vikings founded the Irish cities of Dublin, Wexford, Waterford, Cork, and Limerick.

Beginning in 1169, however, the Norman invasion fused Ireland together politically with England, an arrangement that lasted until 1921 for 26 counties, and which still exists in the six counties that comprise the UK province of Northern Ireland. Despite the repressive Norman feudal policies that benefited a small elite of colonists in the “Pale of Settlement” in the eastern part of the island, Anglo-Norman elites gradually merged with Irish natives. The Plantagenet dynasty tried to maintain strict feudal overlordship on the island, and keep the peoples apart in the Statute of Kilkenny (1365) by banning the “Old English” from intermarrying with the Irish, using the Celtic language, Irish dress, and Brehon Law.

Within Ireland, Protestants of various affiliations found common ground in the anti-Catholic Orange Order, named for William of Orange, founded in 1795. Sectarian killings between Irish Catholics and Protestants broke out in counties Antrim, Down, and Armagh in 1797, yet in 1798 Anglicans and Presbyterians joined with Catholics in the United Irishmen revolt occurred under Anglican Theobald Wolfe Tone. The revolt failed, despite French intervention, and in 1800 the Irish Parliament was dissolved in the Act of Union.

Catholic political emancipation in 1829 was achieved by politician Daniel O’Connell, and Catholics and Protestants alike supported both the Young Ireland reform movement and the Repeal Association to end the union with Britain in the 1840s. The movement was crushed when its leaders fled or were exiled to Australia. Renewed political agitation was shaped by the experiences of the Great Hunger of 1845-52, which was caused by a potato blight and British policies of neglect and eviction. The Great Hunger caused the death or emigration of a quarter of the Irish population by 1852.

In the aftermath of the famine, the cause of Home Rule spread more rapidly among the Catholic majority due to the creation of several revolutionary groups and parties, most notably the Sinn Fein party (“We Ourselves”) formed in 1905 by Arthur Griffith. The revival of national consciousness was spurred also by the Irish Literary Renaissance. Protestants in Ulster, fearing Home Rule by a Catholic majority, organized the paramilitary Ulster Volunteer Force (UVF) in 1912, and civil war loomed. World War I brought the vital opportunity to break from the UK when arms were bought from Germany and the Easter Rising began in 1916. Irish rebels rose up in Dublin and captured strategic points in the capital until British Army troops and the Royal Irish Constabulary ended the revolt. Sixteen Irish revolutionaries were executed and became martyrs for the cause of Home Rule, while thousands of other revolutionaries and sympathizers were interned by the British, sowing bitterness among a generation of Irishmen.

In 1918, Sinn Fein won seventy percent of Irish seats in the UK parliament (over ninety percent outside Ulster), but its members abstained from participating in British politics. Instead, they met separately in Dublin and formed the first Dial (parliament), which reaffirmed the proclamation of the 1916 Easter Rising, and created the Irish Republican Army (IRA) to fight for independence from Britain by means of a guerilla war. The Irish War of independence lasted from 1919 to 1921, and after thousands of deaths, the Irish Free State was created consisting of 26 counties, while the UK Province of Northern Ireland retained six (then mainly Protestant) counties. A civil war broke out among those agreeing to the treaty with Britain and those opposed to it, 1922-23, which resulted in victory for the pro-treaty faction led by Michael Collins, who was shortly assassinated by the anti-treaty faction. Thousands of Catholics lost jobs and homes in Northern Ireland following the partition, and eventually, some forty three percent of the Irish population emigrated in the turbulent decade of the 1920s. Ironically, the anti-treaty leader, Eamon de Valera, became the dominant politician for decades within the Free State, and in the Republic of Eire which he proclaimed in 1937. He served for decades in various capacities, including Prime Minister (Taoiseach) and President, and he founded the Fianna Fail party in 1926 after leaving Sinn Fein. De Valera managed to keep Ireland neutral during World War II, and had harsh words with British Prime Minister Winston Churchill over the position of neutrality. Economic ties between Eire and the US have been fostered by numerous Irish and American politicians and trade groups since the 1920s, and Irish-American chambers of commerce exist today in most large American cities, along with the Irish Network, sponsored by the Irish government, to foster greater ties between the two countries.