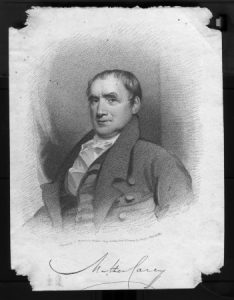 Mathew Carey, a Dublin-born writer, publisher, and economist founded the Hibernian Society for the Relief of Immigrants, which aided Irish immigrants arriving in Philadelphia. (Historical Society of Pennsylvania)

Matthew Carey (1760-1839), a Dublin-born writer, publisher, and economist had been imprisoned in Ireland for his writings advocating the repeal of the Penal Laws, but he escaped and made his way to Philadelphia. In his new city, he published newspapers and books, including the first American Douay Reims version of the Bible for Catholics. In 1790 he founded and served as the first secretary of the Hibernian Society for the Relief of Immigrants, which provided charitable aid to Irish immigrants arriving in Philadelphia. It was one of the earliest of such immigrant relief organizations in the United States.