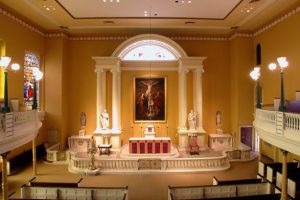 (Photo by B. Krist for Visit Philadelphia)

Irish Catholics who came to Philadelphia established the earliest Catholic Church in British North America—Old St. Joseph’s—in 1733 in Willings Alley south of Walnut Street. The interior is shown in this recent photograph. Another parish, Old St. Mary’s, was founded in 1763 on Fourth Street between Manning and Locust Streets. Newly arrived Irish (many from Ulster) helped push the city’s Catholic population to one thousand in 1785, according to an estimate by Bishop John Carroll. (Photograph by B. Krist)