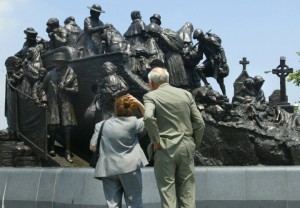 A monument at Penn’s Landing commemorates Ireland’s Great Hunger of the 1840s, also known as the potato famine, potato blight, or great famine, which drove thousands of Irish to Philadelphia in search of economic prosperity and political freedom. (Photo by R. Kennedy for Visit Philadelphia)

Ireland’s Great Hunger of the 1840s, also known as the potato famine, potato blight, or Great Famine, drove thousands of Irish to the shores of Philadelphia in search of economic progress and political freedom. In the 1990s, one hundred and fifty years after the famine, the Irish Memorial, pictured here, was constructed at Chestnut and South Front Street. The bronze, thirty-foot statue depicts starving Irish citizens, gravestones, and orphan children, as the destitute board a ship and walk down a ramp into the United States. When creating the memorial, sculptor Glenna Goodacre’s objective was “to commemorate the past and recognize the contributions of the survivors to educate and inspire future visitors to the site to portray the indefatigable spirit of the Irish to show the eagerness of the survivors to engage the challenges of the new world to reflect the theme of both tragedy and triumph, emphasis on hope and freedom.” (Photograph by R. Kennedy)