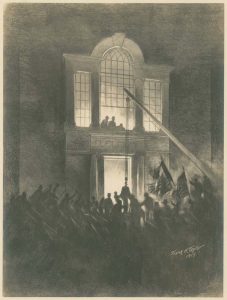 A 1915 drawing by Frank H. Taylor depicts the Liberty Bell being welcomed home to Philadelphia after a cross-country tour. (Library Company of Philadelphia)

At nightfall on Thanksgiving day in 1915, Philadelphians welcomed the Liberty back to Independence Hall after its cross-country tour. City officials and police officers supervised the move of the flower-decked bell safely back to its resting place, while music played through the crowded streets. The bell had traveled to the Panama-Pacific International Exhibition in San Francisco, which celebrated the completion of the Panama Canal and called attention to that city’s rebuilding efforts since the earthquake of 1906.

Philadelphia city representatives had hesitated to let the bell travel in 1915,, worried it would be damaged, but a petition from 500,000 California children helped to persuade Mayor Rudolph Blankenburg to approve the request. The bell began its trip on July 5, 1915, and traveled over 10,000 miles though thirteen states, including Pennsylvania, Ohio, Missouri, Nebraska, Wyoming, Idaho, Washington, and Oregon before it reached its destination in California. This journey was the last time Philadelphians allowed to bell to be transported and exhibited outside the city.