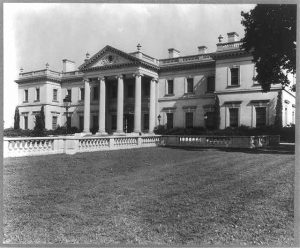 Philadelphia architect Horace Trumbauer built Whitemarsh Hall in Springfield Township for Edward T. Stotesbury, a prominent investment banker. Stotesbury was born to a middle-class Quaker family in 1849 and received a limited education, but showed a great talent for finance. He began his career working for Drexel & Co., a banking firm later merged with J. P. Morgan. He was made a full partner at J.P. Morgan in 1883. Over the course of his career he amassed an estimated $100 million fortune, making him the wealthiest man in Philadelphia. Stotesbury lived in a large Rittenhouse Square townhouse until his second wife insisted on a larger space to entertain members of high society. Stotesbury contacted Horace Trumbauer, who had previously renovated their Rittenhouse Square home.

Trumbauer was a prolific architect whose designs still stand in the city and it suburbs. He is perhaps best known today for his Beaux-Arts works including the Philadelphia Museum of Art and the Central Branch of the Free Library of Philadelphia on Logan Square, but also gained a reputation for designing suburban mansions for “robber baron” clients. Whitemarsh was completed in 1921 for a then-staggering cost of $3 million. With 147 rooms, three elevators, and approximately 100,000 square feet of space, the home was often compared to the palace at Versailles. It was run by a staff of seventy and frequently hosted hundreds of people for afternoon teas and dinner parties.

During the Great Depression, and in no small part due to the couple’s lavish spending habits, Stotesbury’s fortune declined. At his death in 1938, he was worth $4 million. His widow sold the estate in 1943 to the Pennsylvania Salt Manufacturing Company, which converted it into a laboratory. After the company’s departure in 1963, the estate stood vacant for almost two decades and became a target for vandals and arsonists. In 1980, it was demolished for a new housing development. Some architectural features of Whitemarsh Hall, including the columns from the portico, the main gatehouse, and sculptures, were not demolished and remain a visual reminder of the site’s Gilded Age glory.