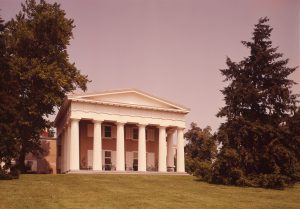 Some of the city’s mansions have been held by the same family for generations. The Biddle family has owned Andalusia since Nicholas Biddle inherited it in 1814. (Library of Congress)

Some of the mansions in the Philadelphia area have been home to the same family for generations. Shipping merchant John Craig purchased a large plot of land in what is now Bensalem, Bucks County, for his summer retreat in 1795. He was likely influenced by the devastating yellow fever epidemic that killed his father two years prior. Here he built his estate, named Andalusia after the region in Spain. The house was bequeathed to banker Nicholas Biddle, Craig’s son-in-law, in 1814 and has remained home to the Biddle family since then.

Andalusia has undergone several expansions in its over two-hundred-year history and was worked on by two of the country’s best-known architects. An 1806 addition was designed by Benjamin Henry Latrobe, who is credited with popularizing the Greek Revival style in America and designed portions of both the U.S. Capitol and the White House. The Greek Revival portico shown here is part of a major addition designed by another architect of the U.S. Capitol, Thomas Ustick Walter. The interior remains largely unchanged from its earliest days. In the early twenty-first century, the Biddle family was offering tours of the estate, which had become a popular venue for weddings.