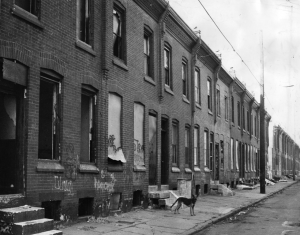 In 1967, North Philadelphia was designated for renewal under the Model Cities program. Rather than serving to unify policies, however, the question of how to combine redevelopment with citizen participation exposed not only the inadequacies of the federal program but also widening racial fault lines between white elected leaders and the city’s African American communities.

North Philadelphia was chosen because of the effects deindustrialization on its neighborhoods. These neighborhoods became filled with abandoned properties or dilapidated housing—slum districts that were often where working-class African Americans were forced to settle because of discriminatory housing practices. Slum districts expanded as white middle-class workers and manufacturers relocated to the suburbs. Property owners next to slum districts abandoned their properties or did little to repair buildings that lost their value. Only 1,044 of the 140,000 housing units constructed in Philadelphia in the early 1950s were available to African Americans. For people who could not rent or purchase those new properties, housing near abandoned or dilapidated buildings was the only option. The street in this photograph was in North Philadelphia.