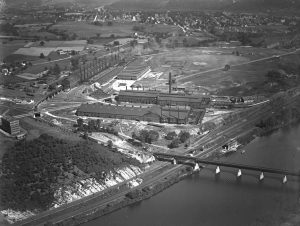 This 1915 aerial view of the Alan Wood Iron and Steel Company along the Schuylkill River shows the factory complex in proximity to the railroad and a bridge over the river, with portions of Conshohocken in the distance. (Library Company of Philadelphia)

On the west side of Philadelphia, ten miles up the Schuylkill River, the town of Conshohocken spawned iron works on a canal alongside an unnavigable stretch of river. The first foundry was built in 1844. The longest-surviving firm was Alan Wood & Co., which established the Schuylkill Iron Works plant there in 1857. By 1920 Alan Wood Steel could produce 500,000 tons of steel a year. It remained the economic mainstay of Conshohocken until the mid-twentieth century.

This aerial view of the Alan Wood Iron and Steel Company from 1915 in Conshohocken, Pennsylvania, shows the factory complex as it sits on the bank of the Schuylkill River and straddles Conshohocken Road. The main facility was designed by the architecture firm of Savory, Scheetz, & Savory and built in 1910. Railroad tracks and bridges over the river are visible as are portions of the city of Conshohocken in the distance.