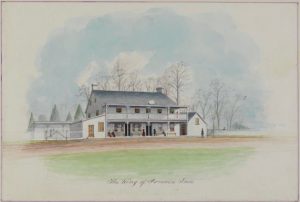 A small farmhouse built in 1719 by Welsh Quaker and farmer William Rees Sr. became the King of Prussia Inn. (Historical Society of Pennsylvania)

The King of Prussia Inn was once just a small farmhouse built in 1719 by Welsh Quaker and farmer William Rees Sr. His son, William Rees Jr., inherited the property in 1756 and in 1769, he converted his childhood home into a successful inn and tavern. According to local tradition, the inn hosted important military figures on both sides of the war, including General George Washington, his officers, and the Marquis de Lafayette.

During the early nineteenth century, the inn functioned as the local community center and town hall. The property changed hands a few times before Anna Heist bought it in 1920 and turned it into a tourist destination. In 1952, the Pennsylvania Department of Highways acquired the property, which stood in the middle of a highway expansion project. Thanks to community activism, the building was saved from demolition, but sat vacant for several decades on the median strip between the lanes of Route 202. Although it was added to the National Register of Historic Places in 1975, and despite local efforts to maintain it, the inn slowly deteriorated and by the 1990s, it was in very poor condition. When PennDot started planning for another expansion of Route 202 in 1997, it became clear that the inn would have to be relocated.

Over the next three years, through the combined efforts of PennDot, the Kravco Company, and the Arthur Powell Foundation, more than $1.5 million was raised to relocate the inn. The local community raised $400,000 more to restore the building after the move. Today, the fully restored King of Prussia Inn is located at 101 Bill Smith Boulevard and serves as the headquarters of the Montgomery County Chamber of Commerce.