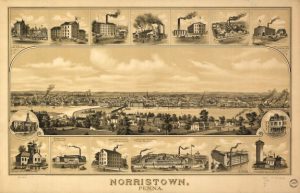 Norristown’s position on the Schuylkill River was advantageous for industry. The opening of the Schuylkill Navigation Company’s system of canals helped transport manufactured goods from the borough to Philadelphia. (Library of Congress)

Norristown’s location on the Schuylkill River was advantageous for industry. The river provided quick and convenient transportation of manufactured goods into Philadelphia. In the early nineteenth century, it was improved with the opening of the Schuylkill Navigation Company’s canal system. Industry in Norristown was diverse, ranging from breweries and cigar factories to foundries, textile mills, garment factories, paper mills, and flour mills. Industrial jobs drew people, including a large number of immigrants, into the borough. In the latter half of the twentieth century, industry faced a terminal decline in Norristown—and much of the Greater Philadelphia region. Changing manufacturing technology and cheap labor in the southern states left the borough’s mills and factories shuttered and silent.