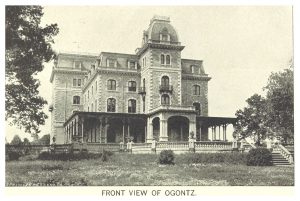 In 1865 Jay Cooke built the fifty-two-room Ogontz Mansion, which in 1883 became the Ogontz School of Young Ladies and eventually was demolished in the twentieth century. (Wikimedia Commons)

In 1865 Jay Cooke built the fifty-two-room Ogontz Mansion, which in 1883 became the Ogontz School of Young Ladies and eventually was demolished in the twentieth century.

Several of Montgomery County’s surviving estates were designed by the noted architect Horace Trumbauer (1868-1938). William Welsh Harrison (1850-1927) commissioned Trumbauer in 1893 to design the gothic castle that later became the administration building for Arcadia University. In 1898 Trumbauer designed Lynnewood Hall in Elkins Park for streetcar magnate Peter A.B. Widener. That monumental building, patterned after Prior Park in Bath, England, later served as a seminary.

Trumbauer also designed Elstowe Manor and Chelten House, a pair of mansions in Elkins Park for Widener’s business partner William Elkins (1832-1903) as homes for himself and his son. Upon their deaths, the properties passed to a Dominican religious order. Elkins commissioned yet another stately mansion from Trumbauer as a wedding present for his daughter, Stella (1884-1963), upon her marriage to George Tyler (1883-1947). In 1932 Mrs. Stella Tyler donated that building to Temple University for its Tyler School of Art.