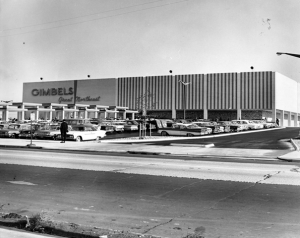 Gimbels was the anchor of the Bustleton-Cottman shopping center, which opened in 1961 and competed for Northeast customers with Philadelphia’s central business district. (Special Collections Research Center, Temple University Libraries)

Shopping centers became a common phenomenon in Northeast Philadelphia’s neighborhoods starting in the 1950s as they embodied the emerging middle-class stature of Northeast residents by offering a wide variety of products in a single location. Gimbels opened its first location in central Philadelphia in 1894, and by the 1960s had become one of Philadelphia’s “Big Five” department stores, with multiple locations around the city. Gimbels opened the anchor department facility, pictured here soon after opening, in 1961 as part of the newly constructed Bustleton-Cottman shopping center, which was the largest commercial site in the Northeast at the time.