Omnibuses at the Merchants’ Exchange 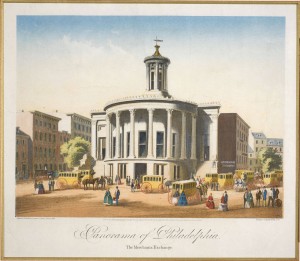 At Third and Walnut Streets in 1832, omnibuses carry commuters to and from the Merchants’ Exchange. (Library of Congress)

Derived from a print created by J.C. Wild in 1832, this view published in 1856 looks west from the intersection of Third, Walnut, and Dock Streets and depicts the Merchants’ Exchange constructed 1832-33 after the designs of Philadelphia
architect William Strickland for the Philadelphia Exchange Company. (The building now serves as headquarters for Independence National Historical Park.) The scene includes street and pedestrian traffic concentrated near the business center and the City Railroad tracks. Many horse-drawn omnibuses, including the Spruce Street, Navy Yard, West Philadelphia and Fifth Street lines, arrive and depart.