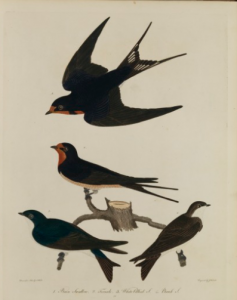 Alexander Wilson, a Scottish poet, emigrated to Philadelphia and embarked on a journey to describe and paint every bird species in North America.(Historical Society of Pennsylvania)

Alexander Wilson was born in Scotland and employed as a weaver, though his true interest was poetry. He used his writings to comment on the inequities faced by himself and his fellow weavers at the hands of their employers. He found himself in court more than once over his inflammatory poems, and soon the mounting court costs caused him to flee to Philadelphia seeking a better life.

It was there that he met naturalist William Bartram, who cultivated in him an interest in ornithology, which Wilson pursued vigorously. From 1802, Wilson traveled the continent recording birds for what became his nine-volume illustrated work, American Ornithology, from which this image is derived. The book included twenty-six new species in addition to 242 previously known to science. As this was the first attempt to describe and paint every bird in North America, he is often referred to as the “Father of American ornithology.”