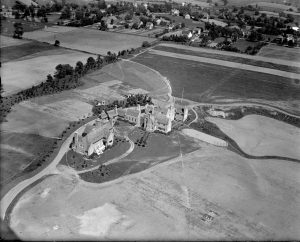 This aerial photo of Carson College for Orphan Girls from 1922 shows the college and nearby Flourtown, Pennsylvania. In the early twenty-first century the school was operating as Carson Valley Children’s Aid. (Library Company of Philadelphia)

Carson College for Orphan Girls, founded in 1917 by Robert and Isabel Carson, in the early twenty-first century remains anchored by several buildings erected from its founding to 1932. When the school formally opened in 1918, ten students were enrolled. Enrollment peaked in 1931 at 124 girls, a majority of them from Philadelphia.

Girls received an education through classes and field trips, and they performed chores around the school. They also worked on the Carson farm, which provided much of the food consumed at the college. Older girls often received vocational training and could earn money during the summer months. The girls also attended local church services on Sundays.