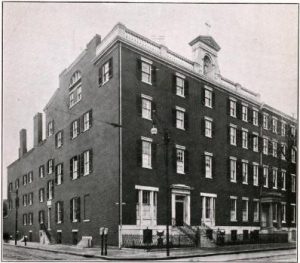 St. Joseph’s Orphan Asylum, originally at Seventh and Spruce Streets in Philadelphia, was established in 1797 after a yellow fever epidemic swept the city in 1793. The institution operated until 1984. (Historical Society of Pennsylvania)

Founded by the Sisters of St. Joseph in 1797 after the yellow fever epidemic of 1793 in Philadelphia, the St. Joseph’s Orphan Asylum operated until 1984. In the last decade of the nineteenth-century, the institution housed two hundred children but continued to grow. A new building was constructed in Germantown and named after Sister Mary Gonzaga Grace, a Sister of St. Joseph who oversaw the asylum’s growth. The children at the asylum’s original location were eventually transferred to the Germantown building in 1944 as maintenance expenses grew for the aging building.

St. Joseph’s closed in 1984 as more orphaned children were placed in foster care rather than being institutionalized. Gonzaga lived in the original asylum building and worked as its head for several years until her death in 1897. Gonzaga Memorial, St. Joseph’s Germantown location, is no longer standing.